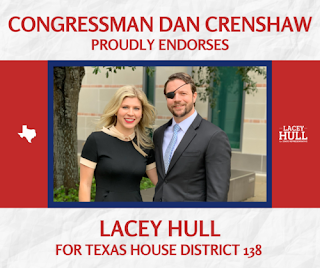 Lacey Hull won a close raise in Texas House District 138. According to Living Blue in Texas her husband filed for divorce the same day she won alleging “Respondent has committed adultery.” According to her campaign finance reports Hull is carrying on other affairs with special interest groups.

Prior to her 30 day out report, Hull had only raised $122,000, a very poor fundraising total for a competitive race. Within a month she had raised over $1.6 Million, most from in-kind donations. $1,027,448 came from special interest groups. These affairs includes Texas for Lawsuit Reform for $645,000, Republican State Leadership for $292,000, Association Republicans of Texas for $191,000. Greg Abbott threw in $17,000 ask $25,000 came from Republican Texas Leadership. Various PACs including home schoolers contributed over $37,000.

Hull won in a very tight race so she really needed the $1.6 Million to pull this off. If her husband had filed for divorce, alleging an affair, prior to the election she would have easily won. Republicans in Texas count adultery as a plus in their world.

Watch for a primary candidate in 2022.

This entry was posted on Tuesday, December 15th, 2020 at 1:26 pm and is filed under Uncategorized. You can follow any responses to this entry through the RSS 2.0 feed. You can leave a response, or trackback from your own site.