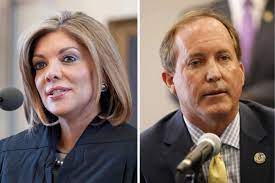 Eva Guzman has served the business community well on the Texas Supreme Court and they are showing their appreciation by financing her campaign for Texas Attorney General. Wanna guess who she will be representing if she becomes AG? Anyone? Anyone?

This entry was posted on Sunday, January 23rd, 2022 at 12:09 pm and is filed under Uncategorized. You can follow any responses to this entry through the RSS 2.0 feed. You can leave a response, or trackback from your own site.