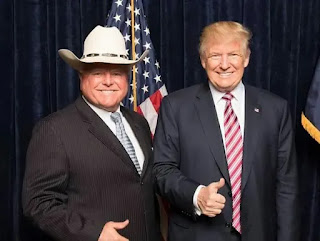 Even Greg Abbott thinks referring to a woman as a “cunt” is reprehensible. From the Dallas Observer:

Texas Governor Greg Abbott, who has endorsed Donald Trump, condemned the tweet in a release. “The language is reprehensible and is an embarrassment. No true Texas gentleman would ever talk this way,” Abbott said.

Sid Miller, like Trump is a rotten human being. Prior to 2016 anyone who used this slur towards a woman would have been run out of the state. Now it is a badge of honor for many Texans, including his donors.

This entry was posted on Sunday, January 23rd, 2022 at 1:24 pm and is filed under Uncategorized. You can follow any responses to this entry through the RSS 2.0 feed. You can leave a response, or trackback from your own site.