Yesterday the extreme right wing lead of the Harris County Republican Party, Steven Hotze, was indicted by a grand jury. According to ABC13:

Hotze’s attorney, Jared Woodfill, confirmed with ABC13 on Wednesday that his client is charged with aggravated assault with a deadly weapon and unlawful restraint. 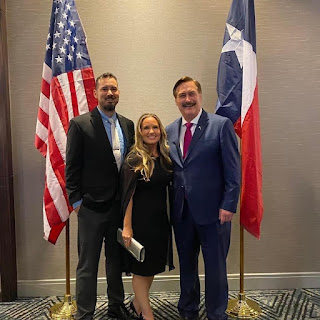 According to ABC13 Hotze’s organization paid an investigator who was indicted last year for allegedly holding an air conditioning repairman at gunpoint while in search of phony ballots. This is what Hotze is now charged with.

Hotze and Woodfill, along with the My Pillow guy, Mike Lindell, held a “Freedom Gala” in Houston concerning “election integrity”. What does this all have to do with Scott Bowen and Misty Dawson? Glad you asked…..

There are signs that outside partisan organizations (PACs) will be infiltrating the CCISD elections with unlimited amounts of money. Last month Bowen sent out a mailer using pics of kids without their permission and of adults who do NOT support his re-election. The return address is P.O. Box 75190 Houston TX 77234. Doing a google search on this address returns the following:

CROT is run by Steven Hotze, the same guy who has just been indicted. Bowen did not report this expenditure on his latest 30 day financial report as an expense or an in-kind contribution. It is odd that this address Bowen is using has anything to do with CROT but it does.
As for Misty Dawson, the picture above with Mike Lindell and her husband is worth a 1000 conspiracy theories.

This entry was posted on Friday, April 22nd, 2022 at 12:07 pm and is filed under Uncategorized. You can follow any responses to this entry through the RSS 2.0 feed. You can leave a response, or trackback from your own site.