What does the (R) stand for behind a political candidates name? 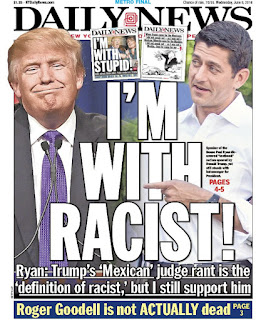 The GRT that Fox News and Tucker Carlson promoted played a significant role in the Buffalo shooting where a well armed, radical, racist, gun nut killed 10 African Americans and yet the leaders of the party stand silent, or are using GRT as a campaign talking point. They have stood silent as the leader of their party refers to Native Americans as Pocahontas, Mexicans as rapists, Muslims as terrorists, Asians as virus speakers, and nazis as “good people”.

So, what does the (R) stand for behind a political candidate running for office? Own the title.

This entry was posted on Wednesday, May 18th, 2022 at 11:45 am and is filed under Uncategorized. You can follow any responses to this entry through the RSS 2.0 feed. You can leave a response, or trackback from your own site.