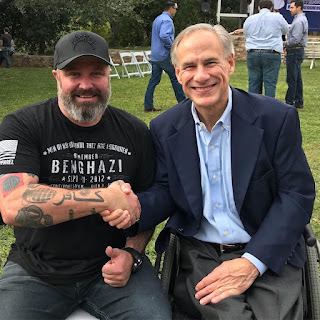 What the living f*ck is happening in Texas?

First we have a Republican candidate for the Texas Senate, Bianca Gracia, meeting with the Proud Boys leader, Enrique Tarrios and Elmer Stewart Rhodes the leader of the Oathkeepers a day before the Jan 6 insurrection. Both have been indicted for seditious conspiracy which if convicted would put them in jail for 20 years.

Now the “conservative” Governor of Texas, Greg Abbott, has been photographed with Joe Biggs, a leading figure in the Proud Boys organization. Biggs has also been indicted for seditious conspiracy and could face 20 years in prison. Seditious Conspiracy is defined as:

It doesn’t matter if he took the pic prior to the indictment. The bottom line is he took a pic with Joe Biggs an extreme white wing nut. What the living f*ck was he thinking and what does this have to do with Hunter Biden? Abbott is more crippled than we ever thought.

This entry was posted on Sunday, June 12th, 2022 at 2:50 am and is filed under Uncategorized. You can follow any responses to this entry through the RSS 2.0 feed. You can leave a response, or trackback from your own site.